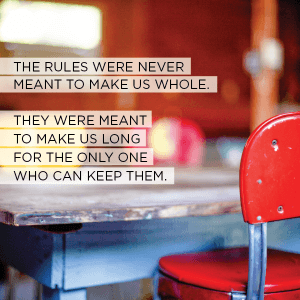 I didn’t see my firstborn son till he was four days old. Long story.

That’s because when he was born, I was in a coma. Even longer story.

I started waking up the day after his birthday, and though at first I didn’t know where I was or how I got there, I knew instinctively that my baby had been born — that he was no longer a part of my physical body.

Every particle of me ached to see him.

My family whispered words to me of how beautiful he was —how good he was doing despite his unusual birth. They told me about his ten tiny fingers and ten perfect toes, about the milestones he’d already passed, about the impossible smallness of his two-and-a-half pound self.

I begged for these drops of news, but each one only made me long for the real drink — my child in my arms.

Stories could never satisfy my thirst.

The Colossians were worried that they weren’t doing everything right. Teachers were dropping by with the latest self-help fads of the day, stirring up condemnation in their hearts about not following this rule or that timeline or this path for their lives.

Paul tells them not to judge themselves or to let anyone else by the old ceremonial law — what to eat or drink or whether or not their life is going by the book or the calendar — and he tells them why:

These are a shadow of the things to come, but the substance belongs to Christ. Colossians 2:17

The word for shadow here — skia — is the same one used by Matthew and Luke when they quote from Isaiah, who prophesied the birth of Christ:

the people dwelling in darkness
have seen a great light,
and for those dwelling in the region and shadow of death,
on them a light has dawned. Matthew 4:16, also referenced in Luke 1:79

The old laws — the old rule-following life — that was all just a shadow to let us know that Someone was standing in the wings to save us from ourselves, Paul says.

Sticking with the image-management kind of righteousness — trying to behave, to look like the right kind of people before God and others — is choosing to still dwell in the dark region of death when the light has dawned.

Like the stories I heard about my son before I could see his face, the rules were never meant to make us whole.

They were meant to make us long for the only One who can keep them.

Christian maturity, then, is about moving from shadow-life to substance-life — longing for the real thing instead of keeping the rules. It is about talking to ourselves instead of just listening to ourselves — actively telling ourselves the truth instead of becoming a passive slave to lies. Here’s what that can look like in five of the places where we live:

When my kids go wrong

When I am fearful of what’s happening in the world

When I face a relational crisis

I have been on the shadow side of every one of these. There is grace for that.

But just like that day in the NICU, when I gazed down through the sleepy haze of illness and an oxygen mask to see my son’s face, there is infinite joy in holding on to the real thing instead of a dim and powerless story about it.

There is hope and love and power in moving from shadow to substance, out of the darkness and into the light.