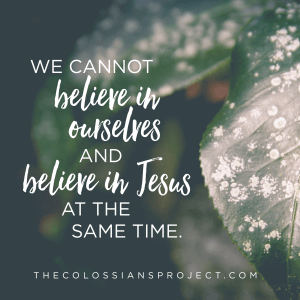 At the end of Colossians, we stumble upon a Bible mystery, one that still hasn’t been solved to this day:

Give my greetings to the brothers at Laodicea, and to Nympha and the church in her house. And when this letter has been read among you, have it also read in the church of the Laodiceans; and see that you also read the letter from Laodicea (Colossians 4:15-16).

This letter from Laodicea — a city eleven miles away from Colossae at the time – has never been found. Some theologians say the “lost” letter is actually the Book of Ephesians, which they believe was intended to be a circular letter passed among the churches in this area. Some say it exists in the apocryphal Epistle to Laodicea, but most scholars believe that letter to be a forged compilation of Paul’s other writings, clapped together in the fourth century to fill the hole left by this verse. Most say the letter’s simply lost, and therefore not meant to be part of scripture.

Whatever the case, if Paul wrote it and recommended the reading of it, you can be sure it was built around the themes of Paul’s life and ministry: the centrality of Christ and a call to serve Him in humility and holiness.

You can also be sure that, in the end, the Laodicean church didn’t take either that letter or this one to the Colossians to heart. We know, because Christ Himself dictates a blistering P.S. in the book of Revelation, chapter 3:

And to the angel of the church in Laodicea write…I know your works: you are neither cold nor hot. Would that you were either cold or hot! So, because you are lukewarm, and neither hot nor cold, I will spit you out of my mouth…I counsel you to buy from me gold refined by fire, so that you may be rich, and white garments so that you may clothe yourself and the shame of your nakedness may not be seen, and salve to anoint your eyes, so that you may see (Revelation 3:14-15, 16, 18).

This letter is one giant Jesus-punch in the face.

Beyond the graphic rebuke of having Christ vomit out their distasteful, ineffective deeds, a Laodicean would hear this as the world’s most insulting rap battle. Counsel to buy spiritual gold was a jab, as the city minted its coins with the faces of false gods. Advice to pick up some white garments was another taunt, likely mocking their impurity in this region known for its pagan sexual practices. Caution to anoint spiritually blind eyes would have really hit home, as Laodicea was home to one of the region’s most notable medical schools. Its speciality? Ophthalmology.

But it’s the lukewarm thing that probably really got under their skin. Laodicea stood in the shadow of the mighty Hierapolis, five miles away and world-famous for its hot springs. For all their wealth and worldliness, Laodicea has no water supply. It must be piped in from their neighbors — arriving muddy, tepid, foul-smelling, and good for almost nothing but spitting out.

Christ stabs at their sore spots — sticks these arrows in their pride — to get their attention. Their feelings don’t matter as much as their souls.

We cringe for Laodicea; we should cringe for ourselves. What letters are we tossing aside right now — what kinder warnings are we failing to read and to heed?

Are we arguing with the Spirit about our tiny steps into sin? Our slow slide away from faith? Our quiet, bitter steps away from community?

Are we ignoring the tremors of seething anger underneath our marriage, or the simmering disrespect of our children, or the growing hatred toward people and powers in our own hearts? Are we depending on what we can organize and manage instead of what we have surrendered? Are we dismissing a quiet call to more gratefulness instead of complaining, humility instead of pride, repentance instead of unthinking trust in our own desires for our lives?

For you say, I am rich, I have prospered, and I need nothing, not realizing that you are wretched, pitiable, poor, blind, and naked (Revelation 3:17).

Our self-sufficiency, the way we think we’ve got it all down — or the way we think we can get it down one day if we just find the time and the right tools — it’s not saving us, it’s destroying us. We can’t believe in ourselves and in Jesus at the same time.

God writes the gentler letters of Colossians and Laodicea on our hearts every day — in moments of fear or bad news or things that don’t go as planned — in quiet stings of conviction and conscience. Now, Christ only taps at the door. But soon, He will raze the foundation, because He loves us, and our feelings don’t matter as much as our souls.

We must give heed to whispers before they become shouts, listen to wisdom before life becomes weeping.

Those whom I love, I reprove and discipline, so be zealous and repent. Behold, I stand at the door and knock. If anyone hears my voice and opens the door, I will come in to him and eat with him, and he with me. The one who conquers, I will grant him to sit with me on my throne, as I also conquered and sat down with my Father on his throne (Revelation 3:17-18).

The one who conquers will win in the end, and conquering takes war.

We must fight for our holiness. We must struggle in prayer to beat back the armies of our schedules and fears and sinful security blankets, and yes, even our strengths. In a world that constantly tells us we are enough, we must march forward with our battle song: Only Jesus is enough, only Christ will satisfy, only Christ will save.

Every time we sing it, we crack open the door to His knock and invite His power to the table. Every time we repent of our pride, we set a place to dine with Jesus and be filled on his goodness. Fight to take ourselves off the throne now, He says — believe not in us but in the Christ in us, He says — and we’ll sit with Him on His throne in the end, ruling everything for all time.