True confessions time: I am a political junkie. And that’s good news for me, because lately, there’s been plenty of political junk to go around.

Four months ago, I was so wrapped up in this traveling zoo carnival we call an election that I could barely sleep at night. I assembled a political list on Twitter that I consulted a dozen times a day. I subscribed to online magazines, watched debates, studied the pundits. I actually thought about paying the blood money they charge for cable, just so I could get news up to the minute.

I made myself a slave to fears about the future, the nation, and DEAR LORD WHAT ABOUT THE CHILDREN?

Isaiah came to my rescue:

The vision of Isaiah the son of Amoz, which he saw concerning Judah and Jerusalem in the days of Uzziah, Jotham, Ahaz, and Hezekiah, kings of Judah (Isaiah 1:1).

The hopeful truth in Isaiah 9 and in its later chapters — the heartbreaking, beautiful story of a Savior who comes to suffer among us and rescue our hearts from sin and death — didn’t happen for almost 750 years.

But these rulers of Judah could not rewrite the ending. They could not stop it from coming true.

To control our fears, we must anchor them to the eternal story instead of its momentary kings.


But there’s also a second big lesson to learn, and it’s not what we think:

We can never stop being afraid.

Longing for life without fear is not only an impossibility, it’s foolishness. We should be afraid of a roaring fire or a rushing flood or a charging lion – our fear protects us from harm. We should shrink back from the edge of a high cliff to save our lives.

In this same way — to save ourselves — we were also born to fear the Lord:

It is the Lord your God you shall fear. Him you shall serve and by his name you shall swear (Deuteronomy 6:13).

God is our greatest danger — Jesus said it himself — the eternal Story-Writer who can destroy both soul and body in hell (Matthew 10:28). He is the King who can separate us from Himself for all time and do us harm beyond all temporary kings.

But unlike most of our fears, which only torture us, this fear is our rescue.

When we acknowledge His righteous judgment, we find His mercy instead. When we humble ourselves before His holy and terrible power with repentance, we find grace and love and are saved. The Lord is our greatest danger, but He is wrapped up in our greatest hope — the eternal Story-Writer who can destroy both soul and body in hell but who gave His life as a ransom for many (Matthew 10:28; 20:28).

To conquer our worries, then, we don’t stop them. We relocate them. God calls us to fear Him only — because He is the only safe place to be afraid.

Isaiah’s thoughts on this truth make me wonder if he’s been watching the prime time news:

Do not call conspiracy all that this people calls conspiracy, and do not fear what they fear, nor be in dread. But the Lord of hosts, him you shall honor as holy. Let him be your fear, and let him be your dread (Isaiah 8:12-13).

I stopped my political daydreams (nightmares?) by prying my fears off the temporary and grasping hold of eternity. I stopped looking for conspiracies — stopped honoring government as holy and able to save. News, off. Twitter, closed. Bible, open.

I focused my dread on the Lord of hosts. He is who He is, He does what He says, and He will make all things new no matter how much we are determined to muck them up. His promises turned my fears into peace. I haven’t gone back to politics since.

At some point, we must become tired of gaining the news feed of the whole world but losing ourselves in the process (Luke 9:24-25). The story will go on without us, and God’s script will prevail  —  in this, and in all other points and places on His timeline.

Let us belong to the eternal vision of God, and let us teach our hearts to fear the right things. 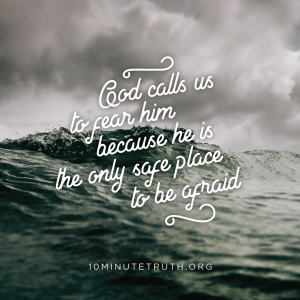