Six months earlier, we had launched our new and shaky church, and that night, I was spent from the striving. I did not want to host another church event — did not see how to endure another night of expectations — did not know where to find another hour of connection in me I didn’t feel.

My inner introvert threw a tantrum all over my husband.

And then, in a hinge-moment that has swung every hour of my life since, Mike paused, took my face in his hands, and answered:

As Christians we have the new self, which is being renewed in knowledge after the image of its creator (Colossians 3:10).

But the God who began a good work in us is still working (Philippians 1:6), and what’s happening inside doesn’t always show up on the outside. This verse brings hope and grace in its hands:

Put on then, as God’s chosen ones, holy and beloved, compassionate hearts, kindness, humility, meekness, and patience… Colossians 3:12

Wear these virtues as a garment – externally wrap yourself in them like a robe. Don’t worry about finding these things in your heart just yet, because Christian living is often a cloak on the outside instead of dredging something up from an inside that’s still being transformed.

You won’t always want to act in righteousness. You might never feel like you’re holy at all. When you don’t feel like the new self you are on the inside, cover yourself in God’s heart on the outside.

As God’s chosen ones, put them on.

As holy and beloved, put them on.

Go daily into the closet of prayer, stand before the grace you’ve received, and clothe your naked abilities in a wardrobe of His compassion and His gentleness and His humble heart. Wrap yourself in the ways you don’t always feel, to the glory of the One who chose you and called you His own.

Honesty keeps this from hypocrisy, because at the heart we are acknowledging who we’ve always been — unworthy, undressed, unholy, but clothed in the robe of the righteousness of His Son (Isaiah 61:10).

Real change comes to our hearts over time, if we listen and surrender — if we obey.

But maturity can be ours now, just by choosing to wrap ourselves in our true identity — in who we have become instead of who we are. 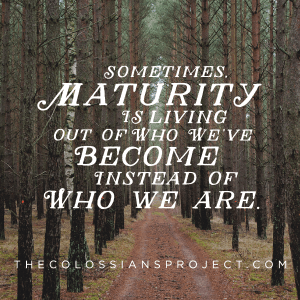