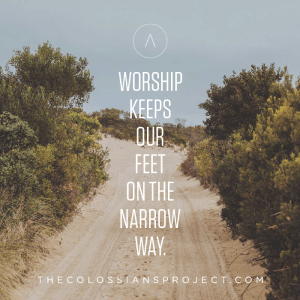 On the day called Sunday there is a gathering together in the same place of all who live in a given city or rural district. The memoirs of the apostles or the writings of the prophets are read, as long as time permits. Then when the reader ceases, the president in a discourse admonishes and urges the imitation of these good things. Next we all rise together and send up prayers. When we cease from our prayer, bread is presented and wine and water. The president in the same manner sends up prayers and thanksgivings, according to his ability, and the people sing out their assent, saying the “Amen.”

Justin Martyr wrote these words around 155AD in his First Apology. He describes a typical worship service of the ancient Church to the unbelieving emperor of Rome — part of an attempt to persuade him to stop the persecution of Christians.

He relates how believers gathered on Sunday to read the word — to teach the word — to serve the bread and wine. He goes on to write that they gave of what they had to support the local community of the faith, and to explain why they meet on Sunday — to honor the first day of creation and the day that Jesus rose from the dead.

I read this with tears. You and I are privileged and anointed to carry forward this same and ancient worship each week — hearing, teaching, praying, giving, singing and taking communion together with local saints each Sunday. We stand on faithful and humble and precious shoulders — Justin Martyr himself was beheaded by Rome a decade or so later for his bold proclamation of the gospel — and we must not take the coming together in the name of our Lord with ease or indifference.

I also read this with joy — encouraged deeply by these pioneer-followers of Jesus who often lived under threat of torment and death — as I picture them rising together to “send up prayers” and “sing out their assent, saying the ‘Amen’.”

About a hundred years before this, the Apostle Paul wrote to the Colossians regarding their worship, saying they should teach and admonish one another and sing psalms and hymns and spiritual songs, with thankfulness in your hearts to God (Colossians 3:16).

The Church through the ages has sung prayers and praises in Psalms and other hymns to glorify and give thanks to the Lord (many scholars believe Colossians 1:15-20 to be one of these hymns). Worship is for God.

But we can’t lose sight of the main purpose of Paul’s letter to the Colossians: to combat false teaching that threatens to draw followers away from the truth of Christ. His instructions in this book, in both doctrine and practice, are meant to provide practical guidance toward that goal.

So in this context, and in the context of the church from the first days onward, worship is for us, too. Singing together is not only worship, but a tool to keep our feet on the narrow way. Songs and hymns and spiritual songs are meant as care for the Church as well as praise to God — sung to teach and admonish each other and remind us of the grace of gospel and the goodness of our Lord.

Worship is holding the hands of other believers — those beside us and those gone before us — in unity, encouragement, agreement. It is another way to let the word of God dwell richly in us as a community, raising a weapon against a world that tears us from the truth. It is rising “together to send up our prayers” — singing out our “assent and saying the ‘Amen’.”

It is telling one another hold on — I believe — I agree — and I will keep faith for you right now if you cannot.

This one’s for the band and production teams at Grace, who serve me in this way more often and more powerfully than they can imagine.