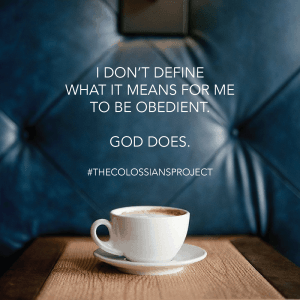 Take it from me: before you decide to write through Colossians, you should read chapter two, verse eleven first:

In him also you were circumcised with a circumcision made without hands, by putting off the body of the flesh, by the circumcision of Christ…

Otherwise, you could get to this point and find yourself writing 900 words about circumcision for the whole Google to see.

But me talking about circumcision isn’t the scariest thing about this verse.

The scariest thing is what it really means.

Let me tell you a little bit about the second hardest year of my life.
When I gave birth to my first son, I was convinced that being a Christian mom meant a long list of lovely and semi-true things. But at the top of that list was the Thing of All Things:

Staying home with my babies.

At the time, though, I brought home almost all the bacon; Mike was still in seminary, and his night shifts as a tech at the hospital didn’t put a dent in the bills. But I believed without a doubt that staying home with my son was definitely God’s Will, God’s Desire, God’s Very Best Plan.

So I waited. My maternity leave slipped by without pause or mercy, but surely, certainly, God was about to go all miracle on us.

Just you wait and see.

For eight weeks, I breathed prayers by the mailbox and the phone.

And on the first day of the ninth week, I sat back behind my desk at work, and I sobbed.

I would stay at that desk for more than a year.

The really, really good news.
Circumcision was a sign of the covenant established by God with Abraham in Genesis 17 — the foolproof Old Testament way to show that you were one of God’s chosen people, the Jews. For thousands of years, it was a physical and spiritual sign that said I belong to the one true God. Jewish baby, eighth day after birth, circumcised, done.

When God, in His unfailing mercy, threw open the doors of salvation through Christ to the Gentiles (Acts 10), circumcision had become so ingrained in the Jewish identity that it was the one thing Jewish believers couldn’t seem to stop adding on to faith in Jesus. As they spread the good news of the gospel and helped start new Gentile churches, some of them carried the message forward as “call upon the name of the Lord Jesus Christ, and oh, by the way, here’s a knife.”

We know this happened a lot, because Paul deals with this false teaching over and over in his instructions to the churches (here, here and here are just a few places). This letter to Colossians is no exception — someone was likely spreading the circumcision doctrine there. No need for that though, Paul says, because a spiritual circumcision happened on the inside of you, the day you trusted in the work of Jesus Christ.

But wait, you thought circumcision was scary.
Through Christ, Paul clarifies, obedience is no longer a work of the hands, but a work of the heart. Following God is no longer about following the rules and checking off lists, it’s about seeing, knowing, loving, and treasuring the gift of His Son, Jesus Christ.

And that’s where things get terrifying.

For me, it meant that year behind my desk was one of the most difficult of my life. Not only because I had to trust God to be enough for lost hours with my son, but because I watched the rickety, self-made platform on which I had built my life in Christ crumble to the ground.

Being a stay-at-home mom was my “circumcision” — the mark I had counted on to prove I was following God. I couldn’t rest in my identity as a Christian woman without it. I was smashed by the bricks of my own add-ons to faith in Jesus as they fell around me — my “ought-to-happen” over the bare bones foundation of His Word and His Spirit in me.

For fourteen months, I was humbled over and over as I learned the hard truth:

I don’t define what it means for me to be obedient. God does.

Whether home or not, married or single, mother or childless, rich or poor, healthy or sick, homeowner or renter, missionary or middle-manager — measuring the effectiveness of my life in Jesus by my preferred scenarios of obedience denies the work of Christ in me. Look: I, Paul, say to you that if you accept circumcision, Christ will be of no advantage to you. Galatians 5:2

The scariest thing about being a Christian is knowing the best and truest part of my life is now made without hands. It is a daily battle of trust. It is throwing myself before the mercy of Christ, believing that He transformed me instead of just giving me a tune-up.

It means I know that interruptions aren’t roadblocks on the road to do what I imagine is God’s will.

They are ways to see God’s will at work, and I should look for Him there.